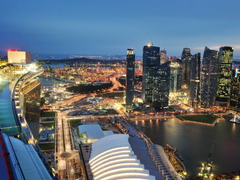 India’s central bank seeks feedback on its plan to issue rules on the increasingly popular form of short-term financing. Sand in the gears (not oil)

Lost in end-of-year news and the plunge in the price of oil, systemic changes to bank deposits will change banking for treasurers. Technoform raised a Rmb10 million loan from ICBC in a Chinese-Singaporean pilot initiative that bypasses foreign debt quotas. At least four other companies are following suit.