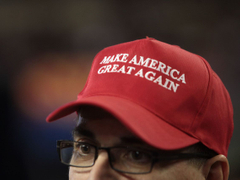 Does the inauguration of the 45th president of the United States spell the beginning of the end for American companies outsourcing work to cheaper Asian countries?